How to debug Power View errors?

If you like to trouble shoot any errors that you get with Power View then you have an option to enable tracing in PowerPivot in Excel 2013. You can enable tracing as shown in the below screenshot. 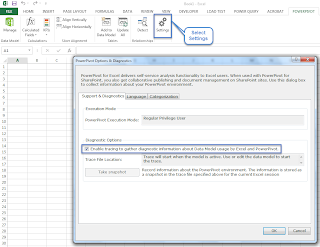 Once enabled and PowerPivot model is active, this can be done by opening PowerPivot window then by clicking settings again from the PowerPivot menu you will be able to see the trace file path as shown below.

Note: The trace file is similar to the SQL Trace file and can be opened in the same way and will provide the ability to debug the DAX 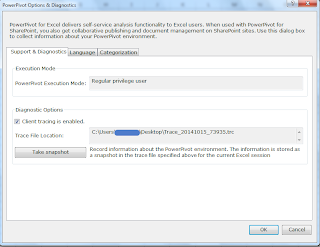 SignalR is an amazing framework that delivers a real-time and bidirectional messaging platform.

SignalR uses the new WebSocket transport mechanism which is supported by browsers that supports HTML5. A ASP.NET SignalR connection starts as HTTP, and is then promoted to a WebSocket connection if it is available. WebSocket is the ideal transport for SignalR, since it makes the most efficient use of server memory, has the lowest latency, and has the most underlying features (such as full duplex communication between client and server)

WebSocket requires the server to be using Windows Server 2012 or Windows 8, and .NET Framework 4.5. If these requirements are not met, SignalR will attempt to use other transports to make its connections.

Current attempts to provide real-time web applications largely revolve around polling and other server-side push technologies, the most notable of which is Comet.

Comet is a web application model in which a long-held HTTP request allows a web server to push data to a browser, without the browser explicitly requesting it. Comet-based push is generally implemented in JavaScript and uses connection strategies such as polling, long-polling or streaming.

With polling, the browser sends HTTP requests at regular intervals and immediately receives a response. This technique was the first attempt for the browser to deliver real-time information. This is good only if the message intervals are well known.

It is important to understand, however, that when you have a high message volume, long-polling does not provide any substantial performance improvements over traditional polling. In fact, it could be worse, because the long-polling might spin out of control into an unthrottled, continuous loop of immediate polls.

With streaming, the browser sends a complete request, but the server sends and maintains an open response that is continuously updated and kept open indefinitely (or for a set period of time). The response is then updated whenever a message is ready to be sent, but the server never signals to complete the response, thus keeping the connection open to deliver future messages.

However, since streaming is still encapsulated in HTTP, intervening firewalls and proxy servers may choose to buffer the response, increasing the latency of the message delivery.

HTML5 Web Sockets to the Rescue!

HTML5 Web Sockets provides a true standard that you can use to build scalable, real-time web applications.